Neil Mulholland and Emma Saroji from Malaysia have been crowned men’s and women’s world champions today in Australia at the Helensvale Bowls Club on Queensland’s Gold Coast.
Mulholland, who is the toast of the Emerald Isle after his 10-10 8-3 victory in the men’s world singles champion of champions over Malaysia’s Fairul Muin in the main event, signified his intentions in the morning’s semi finals when he eliminated the previously undefeated Australian Scott Thulborn.

A fantastic achievement by Neil which proves once again that Ireland have the talent to compete at the highest levels. 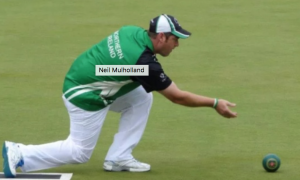