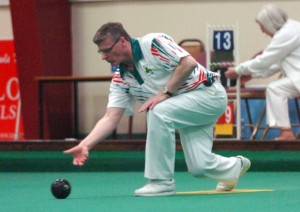 David Corkill celebrated his 100th indoor cap by helping Ireland enjoy one of their best performances in the Home International Championships at Stanley Bowls Club.

Corkill, who has won 27 national titles, was acclaimed not only by his Irish team mates for his fantastic achievement, but also by the other three home nations, who formed a guard of honour as he took to the carpet.

He was presented with a memento by Ireland president Trevor Colvin and secretary Ronnie McKitterick to mark the occasion.

Corkill, now the sport’s top television commentator, and England’s Andy Thomson are the only players to have reached the century landmark on the indoor circuit.

The superb performance by the Irish team also helped put the icing on Corkill’s celebratory cake!

Even though they were pipped at the post for the title on shot advantage, manager Roy McCune insisted it was one of the best displays he could remember over the three-day event.

They began with an battling defeat by England, but proceeded to turn in two stunning performances to rack up wins over the reigning champions Scotland and then Wales.

“It was a tremendous display, one of the best on record,” beamed McCune.
“To finish level on points with both England and Scotland was reward for the hard work the squad put in over the winter.

“Even in the opening defeat, it was a case of so near yet to far. It would have been a lot closer at the finish only for Andy Thomson, Greg Harlow and Graham Shadwell, who changed heads at vital stages in the game. The overall defeat would certainly have been down to single figures.

“In past years heads may have dropped after suffering an opening defeat. Instead, the boys really upped their performance against Scotland. We actually built up a 20 shots lead at one stage. The Scots managed to cut it back over the final few ends, but we still had enough in the tank to see out the game.

“We were not only playing the team, but as usual, Scotland brought a huge following with them. After that, the boys couldn’t wait to go into action against the Welsh and they maintained the same momentum.”
McCune added: “It was a game we were always in control. This team have been in a building process for a few years now. There were a few new faces on board and a couple of recalls, along with a number of positional changes, but everything and everyone gelled together superbly well.

“It is a relatively young group, with a nice mixtures of experience. We’ve proved we are now a forced to be reckoned with and we must now build on this performance.

“There is a superb team spirit and great mood in the camp — everyone pulled together and it paid a big dividend.”