The Atlantic Championships 2019 have just finished in Cardiff.These championships are important as it is also the qualifier for next years World Championships to be held in the Gold Coast, Australia.

Ireland teams have qualified for next years World Championships in seven out of the eight events and indeed the Ireland Mens team leave Cardiff with a very creditable two Bronze medals and the Ladies team with one Bronze medal.

In the first week the Mens Pair of Aaron Tennant and Mark Wilson just missed out on a medal after losing in the playoff game on a measure in a tie end. The triple of Adam McKeown, Neil Mulholland and Andy Kyle qualified out of their group in the Triples. Courtney Wright qualified in the Ladies Singles. Unfortunately the Ladies Four of Gemma McClean, Ashley Rainey, Shauna O’Neill and Sarah-Jane Curran just missed out on qualification.

In the second week Adam McKeown more than justified his selection for the Singles slot by qualifying out of his group with nine wins out of eleven games. He won a hotly contested playoff game against the South African player by 21-19. He lost to Darren Burnett in the semi-final finishing with a Bronze medal. The Ireland Four of Aaron Tennant, Neil Mulholland, Andy Kyle and Mark Wilson also won a bronze in the fours losing out to eventual winners Scotland in their semi-final.

The Ireland Triple of Ashleigh Rainey, Courtney Wright and Shauna O’Neill lost in their semi-final to Scotland but still ensured a Bronze medal. 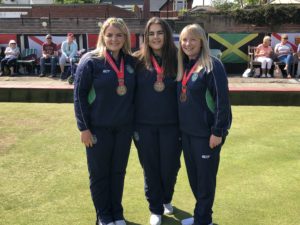 So a successful tournament finished with qualification for the World Championships next year in seven out of eight events and winning three Bronze medals in the process.

Congratulations to all our players.